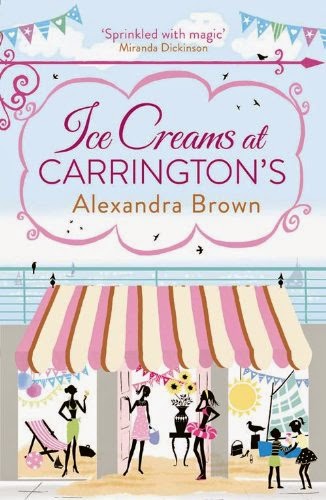 Georgie Hart and Carrington’s Department Store have got the world at their feet. Since a reality TV series put them both on the map, life has been amazing! Carrington’s profits are in the pink, Georgie has carved herself a place in the nation’s heart and even better, her romance with Tom, the store’s boss, has finally blossomed after a shaky start.

Now summertime has come to Mulberry-on -Sea and Georgie is in great demand. The town is holding a big summer festival and she and her mates from Carrington’s are planning on making sure that Mulberry puts on the show of its life!

But Georgie is about to get the offer of a lifetime – one that is just too good to turn down and something that will test her loyalties to their limits… Will Georgie be able to pull off it off once again, or has her luck finally run out?

Ice Creams at Carrington’s not my first book but the third (THIRD!) book by Alexandra. Hopefully this won’t be the last or I’ll fly to UK to beg Alex for a fourth Carrington’s book. I loved her previous works because they were such comforting reads. I read the second book of the trilogy in March and got all excited about this last book. Published in June, pretty ashamed that I read it only this late. I love summer reads as much as Christmassy ones. The cover of ICAC is just cute and it’s definitely my fave cover!

Massive thanks to the lovely publicist at HC for sending me a copy! Pretty cover aside, I loved the story and was hooked from the very first page. I would like to praise Alex for creating such wonderful characters that are so real that they pop out of the pages. I am pretty sure readers and reviewers out there would agree with me! I was fangirling because Tom is just so purrrfect! This final book was just adorable and sweet, like the two others. The dramas and gossips made everything lighter, a lovely book to curl up with on a lazy Sunday.

I caught up with the fabulous Carrington’s team and their lives on Mulberry. They came such a long way since Cupcakes and they have matured so much into successful people with great lives. Such fun people and I wanted to minimize them and make them my Lego-sized friends or just bag charms to be paraded. They made me feel as though I am meeting some old friends and gossiping over tea and cookies.

Alex’s description of each character made me feel as though I knew them and I could see her love for bags through Georgie. I love Georgie. She’s now the IT Girl of Mulberry. She bagged the hottest eligible bachelor. She has celebrity friends. Such an enviable life. She’s has changed so much since Cupcakes and I have been through three books with her. I almost can’t believe this is the final instalment. Aww! Georgie’s like my twinnie, if only she’s real. I could talk to her about bags all day and probably stalk Anya Hindmarch. Probably we might stalk Lawson this time. Lolzers.

Eddie’s existence in this story is like sprinklers on cupcakes! He’s so lively and everything in life is so stress-free for him. Everything is fun about him and he’s oh-so-dramatic. You just can’t help but fall for him. Sam on the other hand, suffers from post-natal stress and eventually gets better. Ooh, I guess I don’t have to go on about them as they’re stunning characters and if you read the previous books, you should know them well! This book was well laced with references of cakes, ice creams and all the yummiest desserts under the sun. I was like eating with my eyes, and not gaining weight.

Ice Creams at Carrington’s is another delicious, as light as a piece of meringue read by Alexandra Brown and the cuteness of this story will melt ice creams. Whoop! Alex mentioned LAWSON in this book. Andy, read this!

Till next time! Just a general announcement here, Alex’s new novel, The Great Christmas Knit Off is out this November! Something to look forward to! Yayzers! xx
Labels: 2014 Alexandra Brown Book Review