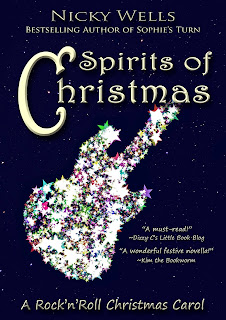 Source : Sent by the author (Thanks, Nicky!)

At one time, up-and-coming rock singer Jude had it all: a great band, a platinum record, a loving girlfriend. This Christmas, however, he is well down the road towards spontaneous self-destruction.

Unwitting at first, Jude has progressively alienated his band and driven away the love of his life. Tonight, the night before Christmas Eve, he has broken the final taboo during a disastrous gig. Yet Jude doesn’t see how badly his life has derailed, not until a ghostly procession of legends passes through his bedroom with a series of vivid and powerful wake-up calls.

Will the Spirits help Jude put the friendship, love, and rock music back into his Christmas?

Spirits of Christmas is a modern-day rock’n’roll adaption of Charles Dickens’ classic A Christmas Carol. This novella will enchant romance readers, rock lovers, fans of ghost stories, and everybody who adores the festive season.

When Nicky told me she was writing a Christmas story, I was beyond excited. Once a rock chick, always a rock chick! From the blurb itself, one could easily tell Spirits of Christmas is different from other Christmas stories. I really enjoyed reading it and this time, there were new characters! Jude, the front-man of a band, The Blood Roses and Carrie, his partner with a dream of becoming a journalist. The beginning of the story was quite creepy and I was totally freaked out. However, the story was well as I read on. Every event in this story was so real to me, as though I'm witnessing with my own eyes. There are some funny parts that had me laughing. The spirits may have freaked me out in the beginning but I got used to them as the story progressed. I loved both Carrie and Jude like as much as Dan (look out for Dan in this short story!) and Sophie (from the Rock Star Romance Trilogy). At the beginning, Jude was portrayed as a bad-tempered band leader but changed gradually after meeting Past, Present and Future. I imagined Andy Brown (from Lawson) as Jude and Carrie as Mollie King (for a short while...). I adored Carrie as she's a really supportive girlfriend. She gave up her dream of becoming a journalist to support Jude, totally selfless thing to do. If you ask me, I'm not sure if I would do something like such. The names of spirits seriously made me laugh, no idea why though.  Though I'm not a fan of roller-coasters, this one is an enjoyable ride! This short story somehow has reminded me of all the great times I had, reading short stories for Literature. This story is VERY Nicky ; guitars, rock stars and amazing heroines. I enjoyed this book as much as I did for her previous books and read the whole thing in just one seating. The story ended sooo...oo fast, can't believe it! The ending was touching and I had a little cry. I would like keep this review short and sweet to avoid revealing too much details of the story but I'd say it's a perfect Christmas treat!

To all fans of Nicky Wells and chick-lit lovers out there, do read this book!

Get your copy of Spirits of Christmas here :

About Nicky Wells : Romance that Rocks Your World 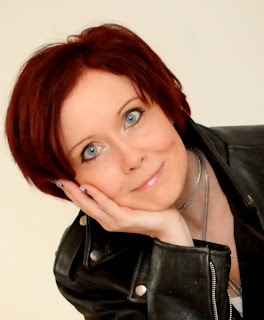 Nicky Wells is your ultimate rock chick author. Signed to US Publisher, Sapphire Star Publishing, Nicky writes Romance That Rocks Your World, featuring the rock star and the girl next door.

Born in Germany, Nicky moved to the United Kingdom in 1993 and currently lives in Lincoln. In a previous professional life, Nicky worked as a researcher and project manager for an international Human Resources research firm based in London and Washington, D.C. Like her leading lady, Sophie, Nicky loves listening to rock music, dancing, and eating lobsters. When she’s not writing, she’s a wife, mother, occasional knitter, and regular contributor to The Midweek Drive show on Lincoln’s Siren 107.3 FM. Rock on!