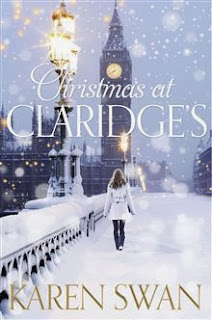 Portobello – home to the world-famous street market, Notting Hill Carnival and Clem Alderton. She’s the queen of the scene, the girl everyone wants to be or be with. But beneath the morning-after makeup, Clem is keeping a secret, and when she goes too far one reckless night she endangers everything – her home, her job and even her adored brother’s love.

Portofino – a place of wild beauty and old-school glamour, and where a neglected villa has been bought by a handsome stranger. He wants Clem to restore it for him and it seems like the answer to all her problems – except that Clem has been there once before and vowed, for her own protection, never to return...

Christmas at Claridge’s by Karen Swan is definitely one of my top ten reads for the year. To be honest, the cover captivated me to review this book. I didn’t know what to expect as it’s my first book by Karen. I have seen her books in bookstores and now, I wonder why I didn’t bother to get them. I would love to read her other books now as she has an amazing style of writing. The gorgeously designed cover for Christmas at Claridge's has certainly captured my attention. A cover is like first impression to me. I know we shouldn’t judge a book by its cover but sometimes I can’t help it. I couldn’t thank the lovely publicist at Pan Macmillan enough for sending me a copy of this brilliantly written book. I was busy preparing for exams when it arrived but that didn’t stop me from reading it.

This story follows the life of Clementine Alderton, party girl from Portobello that seems to have it all – looks, a great brother that would help her no matter what, a supportive family and amazing friends. She has got nothing to worry about and she enjoys her life to the fullest. Irresponsible and spoilt would be the best words to describe her. However, all that is going to change after one night. The massive damage she has caused that night puts her at risk of losing her brother’s love. She has to make a tough choice whether to go to Portofino or not. Despite her fear that the darkest secret she has been keeping would be revealed if she goes to Portofino, she has no choice but to go in order to make it up to her brother.

I was completely surprised as this story was not as Christmassy as I thought. Well, to be honest, I didn’t read the blurb and read the book straightaway. It was not what I expected at all, a lovey-dovey, hilarious chick lit and all that. I don’t sound disappointed, do I?  If you think I was disappointed, let me make it clear for you. I was not disappointed at all and loved every part of it. This book was unputdownable and I read on and on for the secret that was hiding beneath the pages. Losing sleep for this book was totally worth it. The plot was cleverly developed and I loved the heroine.

I really disliked Clem in the beginning but I began to warm up to her as the story progressed. I adored the vivid descriptions of Portofino, Italy and I felt as though I have taken the journey with Clem. I got to see the other side of Clem in Portofino where she’s more matured and responsible and all those traits changed what I thought of her. She also learns how to cook and drive in Italy. To me, the stay in Portofino has transformed Clem into a better human. I was also utterly shocked when Clem’s secret was finally exposed. There were hints all along but with all my imaginations screaming in my head, I didn’t know what the secret would be. I took a bit of time to digest that as though it happened to me and put pieces together. After that, I understood her irresponsible actions and her 12-weeks relationship rule. She has chosen to live that way to mask her secret. I really have lots to say about Clem’s stay in Portofino but I would prefer not to spoil it for you.

Clem's solid as rock friendship with Stella was also something I liked a lot about this story. Their closeness reminded me of what I have with my best friends. Acting crazy together and drinking shots, my parents shouldn’t know about this. The way they have helped each other during hard times touched me a lot. Stella’s such a potential character and I could envision her having a story of her own. I enjoyed reading about her and Clem as it’s entertaining and hilarious. That’s what you get when two fab girls get together. The male characters in this book totally amazed me. First, there’s The Swimmer a.k.a Gabriel. He’s smoking hot and the chemistry between Clem and Gabriel was undeniably intense that I could sense imaginary smoke seeping out through the pages. The existence of hottie number two, Rafa, the handsome Italian has brought mystery to the story. I loved the mysteriousness of Rafa and how his character changed from a minor to a very important character. Amazed by it all.

Christmas at Claridge’s may not be a book you would love from page one but do read on! This story was so beautifully crafted and for me, it was rare and truly different from all the books I have read. A gripping tale of family, love and friendship with a perfect, unpredictable ending.
Labels: 2013 Book Review Christmas Karen Swan