It has been three years since I read Lindsey Kelk’s I Heart Paris and now, it feels like it was yesterday. Time flies. I absolutely heart the I Heart series and today on Eve’s Chick Lit Reviews, I am glad to be interviewing bestselling author, Lindsey Kelk about her new book, I Heart Christmas which is out today! Thank you for answering my questions and Happy Publication Day, Lindsey! 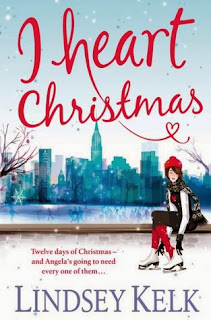 Angela's planning her very own fairytale of New York...
But Santa's throwing her a few curveballs - new job (as if it's not mental enough already), new baby-craze from her best friend Jenny, and Alex determined they should grow up and settle down. Once friends start turning up uninvited on her doorstep (and leading her astray), can Angela really have a merry little Christmas? So much for happy holidays - something's got to give...


1. As a chick lit author, how would you define chick lit?

I think it’s really difficult to define a genre like chick lit. I know a lot of writers who end up being marketed as such never really thought of themselves as ‘chick lit’ when they were working on their books, but found their way on the chick lit table because someone, somewhere in a marketing department decided they would sell best with a pink sparkly cover. Personally, when I write, my priority is to write books that resonate with me and things going on in my life. I’m a young woman, interested in the relationships between people and the chances people take in life and so that comes out in my writing – if that’s a definition of chick lit, then I’m perfectly happy with it.
2. Could you tell us more about your new book, I Heart Christmas?

Angela and Alex have been married for a little over a year and all is rosy. For the first time ever, all Angela wants is for things to stay the same. She loves her job, everyone is healthy and happy and since she’s been so busy in the office, nothing could be more exciting to Angie than a quiet little Christmas with her husband. But this is Angela we’re talking about, that’s never going to happen. Before she’s had time to sink a cup of eggnog, she’s got Jenny, James, Louisa and Alex all going crazy on the home front and having just got to grips with her job, it’s all change at the office. It was super fun watching Angela try to hold her happy Christmas dream together while all her friends fall apart in the most spectacular fashion. And there’s a brilliant bit where she does the lift from Dirty Dancing (if I do say so myself).

When I was writing, lots of my friends were stressing out about work, about their relationships and increasingly, the pressure to start a family. A really common conversation between us is ‘what does it mean to have it all?’ – women are expected to be superhuman these days, to run a home, keep their man happy, churn out children, stay skinny, have shiny hair and be super successful in their careers, all at the same time. Basically, the message is, if you’re not Beyonce, you’re not good enough. And Angela isn’t Beyonce…

I honestly don’t know. I liked being an editor but I didn’t love it. I’d love to say I’d be an actor or someone else involved in telling stories but in reality, I’d probably be stuck in an office job. Maybe I’d be in advertising. Maybe I’d be the female Don Draper without the philandering or alcoholism.

4. Which I Heart book was your favourite to write?

Definitely I Heart New York because it was such a brilliant experience to write a book for the first time. Other than that, I actually liked writing I Heart Christmas. Chrismas is my favourite time of year and I’d missed the gang more than I’d realized.
5. You have written 8 books and a short story so far. Do you have a favourite character and why?

I actually don’t think I could pick! I really love Tess from About a Girl, I think she and I are really similar, in a way that Angela and I were when I started writing but now Angela is totally off on her own. I love writing the bitches and the male characters too, it’s always fun to put myself in a completely different pair of shoes. I loved writing Jesse in I Heart Christmas, I feel like I’ve met him in NYC so many times. Bless him.
6. Do you have a favourite place to go to for inspirations?

Not really. I love to travel so I pick up something different everywhere I go. Sometimes it helps to take myself off to a hotel or anywhere out the way when I’ve got a lot to do. When I’m having a bad day, I sometimes I go down to the bottom of Manhattan and look at the Statue of Liberty. How could that not cheer someone up?
7. Talking about places, what do you love most about New York?

It’s hard to explain but there’s an energy in the city that just makes you feel so connected. Just walking around is reviving, even being at home on my settee but knowing that I’m in NYC gives me a kick that I don’t get anywhere else. Anything could happen, you could meet anyone, do anything. It’s an incredible feeling of potential.
8. A piece of advice for my lovely readers who are thinking of becoming writers?

Being a writer is amazing but it is incredibly hard work. I’ve always been someone who commits completely to what they do but I wish I’d known how tricky the long nights and crazy deadlines could be. There days when I think I’m going completely insane behind my laptop and while I wouldn’t change it for anything, it’s so much more challenging than I would have imagined. When all you see if the Carrie Bradshaw lifestyle, you forget how lonely and difficult it can be. Unlike most jobs, you can’t ever really take a day off, the story is always turning over in your imagination and I constantly feel guilty if I’m not writing – even if I’m still working!

9. This may be a little out of topic, are you more of a Louboutin girl or you prefer Jimmy Choo?

Good question! I LOVE Loubies but Jimmy Choos actually fit me better so I’ve invested in a couple of pairs. I got some Jimmy Choo biker boots recently and they were so expensive, I felt a bit sick paying for them but I’ve worn them nearly every day since so they must have been worth it, right?

10. Lastly, what are you working on now? Tell us more about it?

Right now I’m halfway through the sequel to About a Girl, which is called What a Girl Wants and is out next summer. It’s really early days and I’m very anxious about it at the moment so there isn’t a lot to tell you but I promise it’ll be funny! I can tell you that Amy and Kekipi meet and that’s pretty magical. Really looking forward to getting back to Tess, Nick and Charlie.
Labels: 2013 Author Interview Christmas Lindsey Kelk