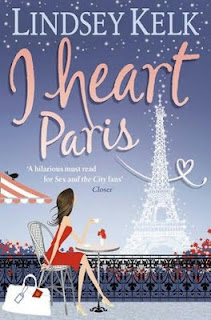 When Angela Clark's boyfriend Alex suggests a trip to Paris at the same time as hip fashion mag Belle asks her to write a piece, she jumps at the chance.

But even as she's falling for the joie de vivre of Paris, someone's conspiring to sabotage her big break. And when she spots Alex having a tête-a-tête with his ex in a local bar, Angela's dreams of Parisian passion starts crashing around her.

With London and her old life only a train journey away, Angela can't decide if she should stay and face the music or run away home...

I saw this book two years back in a local bookstore. The bookstore was having a promotion and this book was given a 20% off. Apart from the quite interesting promotion, the word Paris and the very, very pretty cover caught my attention and I told myself, 'I must get it!'. Just by looking at the cover, I could tell that I was going to love this book.

At that time, I didn't not know that this book is the third book of the I Heart series. I was unsure if I could relate to the story as I have not read the previous books. So, I was having doubts whether to read it or not but since it's school holidays, I decided to start on it.

It's set in Paris, somewhere I'd love to go (it's on my To-Visit list). The main character, Angela Clark is a blogger and her character is very easy to relate to, realistic, interesting and hilarious. Angela's boyfriend, Alex suggests a trip to Paris at the beginning of this book. What a coincidence, Angela was given an opportunity to write a travel piece for Belle magazine on Paris. Since she is going to Paris,her best friend, Jenny sent her three giant DHL packages, labelled 'Evening', 'Day' and 'I don't know when the fuck you'll wear these, but they're awesome', Jenny sent her THREE GIANT PACKAGES OF CLOTHES. And they were all expensive, high end brands, ranging from Balmain to Zanotti. For a moment, I envied her and I wished to be Angela. Mind you, I am NOT materialistic.

Enough about that, to me, Angela's a strong lady. She taught me how to be a bigger and stronger person and make bitches feel intimidated (that's how I feel). I really looked up to her. She's crazy (like me) and fun! I could easily relate to her and I absolutely loved this character.

I loved the supporting characters in this book for without them, this book would not be this interesting. Angela's sexy boyfriend, Alex Reid (I pictured him as Chace Crawford) was very sweet. When things were fucked up, he went to London to search for Angela and make things right though he had a to perform at a festival in Arras. I was so touched. He's willing to miss a show of about 10000 fans, risking his career for Angela.

Louisa, or just Lou was an amazing best friend. She cared for Angela like a sister. She thought Alex hit Angela when she saw Angela's black eye. I'd really love to have a best friend like Lou. How lovely. I teared up at the thought of it. Ah!

Virginie, the French Belle assistant that was sent to help her was really excited and regarded Angela as her hero. She's really cute. Next, Cici! Who's Cici? She's Robert Spencer's granddaughter (said to be Angela's fan) She has provided Angela a list of so-called amazing places to visit and they turned out to be crappy places! She screwed Angela up. Oops, Cici was not Angela's fan but a bitch!

I really love, love, love this book! This book is highly recommended for Chick Lit lovers. Amazing storyline with a little talk of designer clothing and accessories. Unpredictable and I should say, everyone would stay up late to finish this. I did! It left me giggling and grinning like an idiot! Though in this book, there were less romantic dates near the Eiffel tower, I want to visit Paris badly (maybe the hip places first)! This book is fantastic and it's a must read if you love Paris and Lindsey! I'm a big fan of Lindsey! I enjoyed this book very much and I have got I Heart New York and I Heart Hollywood (an early birthday gift from my lovely bestie,THANK YOU!) in my To-Read list! I can't wait for the final book, I Heart London! It's published on 7th June, this year! I would review the other four books as well! Stay tuned!