I am so honoured to be a part of the blog tour for Kate Furnivall's new book, The Italian Wife. So thrilled to be given the chance to do a Q&A interview with the lovely Kate. Scroll down to find out moreee. 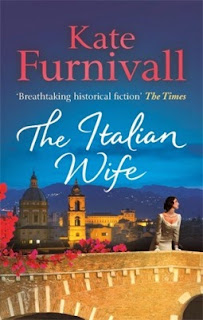 Italy, 1932 -- Mussolini's Italy is growing from strength to strength, but at what cost?

One bright autumn morning, architect Isabella Berotti sits at a café in the vibrant centre of Bellina, when a woman she's never met asks her to watch her ten-year-old daughter, just for a moment. Reluctantly, Isabella agrees -- and then watches in horror as the woman climbs to the top of the town's clock tower and steps over the edge.

This tragic encounter draws vivid memories to the surface, forcing Isabella to probe deeper into the secrets of her own past as she tries to protect the young girl from the authorities. Together with charismatic photographer Roberto Falco, Isabella is about to discover that secrets run deeper, and are more dangerous, than either of them could have possibly imagined . . .

From the glittering marble piazzas, to the picturesque hillside villages and winding streets of Rome, Kate Furnivall's epic new novel will take you on an breathtaking journey of intrigue, romance and betrayal.

Hi Kate, welcome to Eve’s Chick Lit Reviews and it is absolutely lovely to have you on the blog today.

Thanks for inviting me over. It’s great to be here.

1. Tell us a bit more about your new book, THE ITALIAN WIFE.

The Italian Wife is a powerful love story set against the background of Italy in 1932, a troubled time when Benito Mussolini had installed himself as dictator. It is an exciting tale of love and danger, as the forces of greed and corruption battle it out with idealism in the newly constructed town of Bellina.

Isabella Berotti is an architect whose husband was shot dead ten years earlier, but the killer was never found, and it has haunted Isabella ever since. She focuses all her energy on creating a magnificent new town, but her life is turned upside down when a child, Rosa, is abandoned to her care in the piazza.

Inside Rosa’s head are secrets that Isabella needs to discover but the chief of the Fascist Party in Bellina also wants them – in order to ensnare a saboteur who is rebelling against Mussolini and his brutal regime. Isabella takes it upon herself to protect the child and is helped by photographer Roberto Falco. But he also has his secrets, and the love that grows between them is fraught with danger as they search for the truth. It is a complex emotional story full of twists and turns.

2. What is the best thing and the worst part about being an author?

To be honest, this is simple. To sit around all day in your PJs, making up stories, staring out the window and calling it ‘work’ has got to be the best job in the world. Of course it’s agony at times when the words and ideas develop a roadblock that only a good stick of dynamite will shift, but that crowning moment when you cradle your ‘baby’ in your arms for the first time, with its handsome cover and lovely fresh book smell, is a moment that’s right up there with the intense joy after giving birth.

The worst part is equally simple. The dreaded deadline. Aarghh! My stomach lurches at the very mention of the word.

3. What do you love most about publication day?

Oh, come on now, that’s obvious – the champers! Yay! And the flowers and the choccies and celebration and the lovely messages from everybody. It is all fabulous. But I must admit that I do have a small publication day ritual too – it is to ensure the success of the book, the way actors carry a rabbit’s foot in their pocket or a four-leafed clover in their shoe. I get up early, walk to the beach and paddle barefoot in the sea. I did it the day my first book, The Russian Concubine, was published and it jumped on to the New York Times Bestseller list, so I’ve done it with each book ever since. It’s a special pause in the bustle of the day, a quiet moment of calm and hope.

4. If your main characters were to be adapted for screen, who do you imagine playing the roles?

Isabella by the compelling and lovely Nina Hoss (‘Phoenix’ and ‘Barbara’)

Sunrise – the beginning of a new day to get it right this time!

Cake. And then more cake.

6. If you could go back in time to meet one author, who would it be?

I would adore to meet Mary Wollstonecraft Shelley. She would be a fabulous dinner companion with a thousand stories to tell. She was a radical thinker, an early feminist, married to the gorgeous poet Percy Bysshe Shelley, and she was the writer of numerous powerful works exploring the clash between self and society, including the ground-breaking ‘Frankenstein’. She led an extraordinary life in the first half of the 19th century and must have possessed amazing courage to face the adversities that befell her – suicides, the loss of two children and the death of her husband at a young age in a boating accident. She also loved Italy and spent much of her life there, so maybe we’d have a bond in common and lots to talk about!

7. Lastly, what are you working on now? Tell us more about it.

Hmm, I intended to keep it quiet for a bit longer, but since setting off on this Blog Tour it has been winkled out of me by you cunning bloggers. Yes,I admit that I am so in love with Italy that I can’t yet bear to leave it for pastures new. So I am now working on a story set in 1945 at the end of the war when the British and American forces had taken control of a battered Italy and were trying to reassert order and establish a form of democratic government there. Passions were running high and living conditions were harsh, but my main character, Caterina, takes on a skilled wood-craft workshop from her father, who was killed during the war, to earn money to put food on the table. But an American army captain starts to blacken her father’s name and when she confronts him, she finds she is caught up in a world of subterfuge and lies.

Thanks for a great time here. I’ve loved visiting your blog. 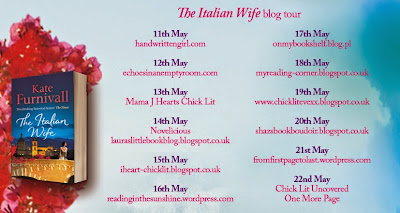 Thanks for reading and do visit the other gorgeous participating blogs! x
Labels: 2015 Author Interview Blog Tour Q&A