I am so delighted to be a part of the blog tour for Swati Sharma's debut novel, Fashionably Yours! Scroll down to find out more! 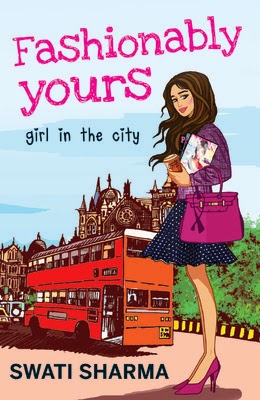 “Maya Kapoor swaps the snowy mountains for the glittering ocean.”

Maya Kapoor arrived in Mumbai with a glamorous dream, quite literally. Maya wants to be a serious fashion writer for the high-end fashion magazine, Glamorous but luck is not in her favor. Instead, she lands a job with a local fashion magazine, Style. Maya hates everything about it but for now this is all she has. Despite all the odds, Maya is excited about living an independent, fashionable life in the city of dreams.

At twenty-five, love has eluded Maya. But when she bumps into the dashing photographer, Aryan Malik, she falls head over heels for his gorgeous smile and charming manner.

But Maya seems to be stuck in a rut - her credit card bills are sky-high, her melodramatic mother can't stop ranting, the boss is unbearably cruel, her younger sister has decided to tie the knot, and she's not sure if Aryan could love a simple, confused girl like her.

Will Maya get the fairytale life she dreamed about or will she let everything slip through her fingers? Read her diary and find out.


EXCERPT
Prologue
It was a very cold December morning and I was lying in my bed blissfully with one foot propped out of the warm quilt. A five-foot tall PVC Christmas tree was standing gloriously by the window. It looked almost magical under the layers of twinkling fairy lights and hundreds of ornaments. Though it had been four days since Christmas, I couldn’t bring myself to take down the decorations and transport the tree back to the attic, much to the annoyance of my mom who could never understood that how on earth her by-all-means Punjabi daughter came to loving such a foreign festival. But for me Christmas was the most happy day of my life. Nothing could go wrong around Christmas. I blew a kiss to the tree before reaching for the top drawer of my nightstand.
As I pulled it open, I felt my heart flutter at the sight of a crisp, white envelope which was going to take me a step closer to my dream. Gingerly I reached inside the envelope and pulled out a letter. I read the job offer for the zillionth time since it had arrived last evening.

Dear Maya Kapoor,
Congratulations! We are pleased to offer you the position of ‘Feature Writer’with the online division of Style magazine.
Please find the attached draft copy of your offer letter from Style, Mumbai.
Do go through the letter and let us know if you have any queries with regards to the offer.


***
Three days later I packed all of my belongings in two suitcases and was driven to the bus station by dad. Mom and Payal came along too. As Payal rolled her eyes the whole way, Dad instructed me about safety and other things and made me promise that I would call him every day and come visit once in three months. When we reached the station, I hugged Dad tightly and air kissed Payal who smiled stiffly at me.
I reached for Mom to hug her and she whispered in my hair, “You have ruined your life. One day you will regret your decision.”

Feel free to check out Swati's website for more information and latest updates!

Get your copy of Fashionably Yours here :