Blog Tour : You Had Me at Merlot by Lisa Dickenson - Review

I am so super excited to be a part of the blog tour for Lisa Dickenson's new book, You Had Me at Merlot! Here's my review of the book!

Title : You Had Me at Merlot

Source : Sent by the publisher (Merci!)

Elle and Laurie are the last ones standing: they're single, they're not having babies any time soon and their weekends aren't filled with joyful meetings about mortgages. For Elle, this is fine - she likes her independent life, she loves her job, and she has no desire to walk down the aisle anytime soon. But Laurie wants love and she wants it now .

So when Laurie begs Elle to come with her on a singles holiday to a beautiful vineyard in Tuscany, Elle is reluctant. You Had Me at Merlot Holidays promises crisp sunshine, fun and a chance to stir up some sizzling romance. Elle has no intention of swapping her perfectly lovely life for someone else's idea of her Mr Perfect, but ten days under the Italian sun with her best friend and lashings of wine? How bad could that be?

On a recent Wednesday night, I spent eight hours on my couch with Lisa Dickenson’s new book, You Had Me at Merlot. When we need an escape, what could be better than sunshine, a fab vineyard and stunning Italy? It is definitely one of the funniest books I have read for the year. It’s my first book by Lisa and I knew I would like it as she is really cool and I like her a lot.

This story has four parts and it follows the tale of Elle, who is crazy about her job and though single, she’s absolutely happy with her life and would prefer if it stays that way. On the other hand, her bestie pie Laurie wants love and she wants it bad. Hence, she booked the You Had Me at Merlot tour and dragged Elle with her. Elle is reluctant but she can’t resist wines and sunshine. How bad could a trip to Tuscany be?

I am sobbing at the mo because it ended too soon. Too soon. I read at my own pace and finished Merlot in one night (this book is that awesome!) and someone fly me to Tuscany, please? I’ll buy you lots of vino, thanks.

I absolutely loved Elle! To me, she's successful, really amazing and strong. I really looked up to her and loved her from page one. I could relate to her ‘I am trying to impress my boss’ moments and to think. Elle’s such a perfect heroine with fabulous personality. She’s so great that not only left a mark but I actually want to be her. She was genuine and she’s really lovely to people she likes. She’s not as much of a drama queen compared to Laurie, she’s calm and cool.

I had fabulous time reading about Elle and Laurie’s adventures in Tuscany and I was instantly transported to a blissful, fun-filled holiday. Lisa did a fabulous job in describing Tuscany and the tour. She must have visited and did a hell lot of research before writing this book. The whole story became better when Jamie, the yummy Italian came into the picture. The sprinkles on cupcakes, the perfect touch to the story. Gah. He’s handsome, talented and has great sense of humour. He is the male version of Elle, workaholic and happily single. I am pretty sure the two of them would have super workaholic babies. The supporting characters were fabulous and everyone Elle meets on her trip has a great role to play in the story and I loved how they’re linked. The plot of this story was unpredictable and I had to keep reading to find out. It had me laughing out loud and it was almost impossible to stop once I started reading it.

Lisa Dickenson’s writing is original, brutally relatable and terribly humorous. Her work has all the hilarity, sophistication and flair one would expect from a book because it’s flipping good. You Had Me at Merlot is an adorable, fun-filled, hilarious read that will make you weep with laughter and believe in love. This is a book for all the single ladies out there! You might need a glass of Merlot to go with it.

What’s next for Lisa? I hope Lisa will write more books and impress us with her writing! If you wish to talk to Lisa, feel free to follow her on Twitter (@LisaWritesStuffs). Download all four parts and buy yourself a bottle of wine!

Check out the participating blogs! x 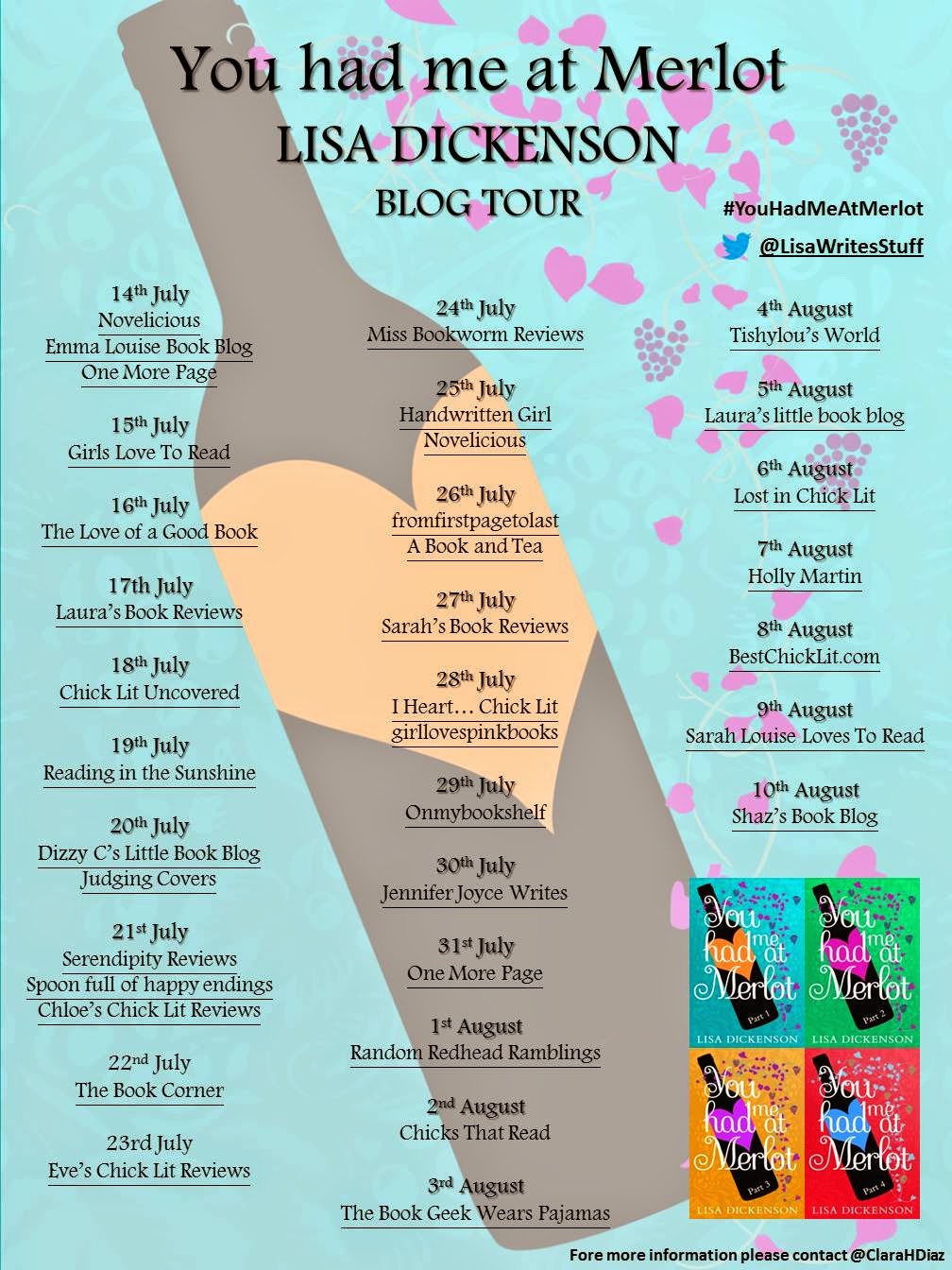