Book Review : I've Got Your Number by Sophie Kinsella 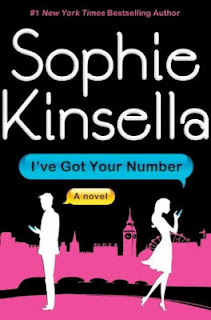 Title : I've Got Your Number

I've lost it. :-( The only thing in the world I wasn't supposed to lose. My engagement ring. It's been in Magnus's family for three generations. And now the very same day his parents are coming, I've lost it. The very same day! Do not hyperventilate, Poppy! Stay positive :-) !!

Poppy Wyatt has never felt luckier. She is about to marry her ideal man, Magnus Tavish, but in one afternoon her "happily ever after" begins to fall apart. Not only has she lost her engagement ring in a hotel fire drill, but in the panic that follows her phone is stolen. As she paces shakily around the lobby, she spots an abandoned phone in a trash can. Finders keepers! Now she can leave a number for the hotel to contact her when they find her ring. Perfect!

Well, except that the phone's owner, businessman Sam Roxton, doesn't agree. He wants his phone back and doesn't appreciate Poppy reading his messages and wading into his personal life.

What ensues is a hilarious and unpredictable turn of events as Poppy and Sam increasingly upend each other's lives through emails and text messages. As Poppy juggles wedding preparations, mysterious phone calls, and hiding her left hand from Magnus and his parents...soon she realizes that she is in for the biggest surprise of her life.

This is the first book I read by Sophie Kinsella! It was good, no, AWESOME! I can't say I love all her books as I've not read them. Anyway, I'm looking forward to getting them! When I knew that this book would be released on Valentine's Day, I was happy (don't know what for)! I told myself I have to get it! I tricked my Dad to bring me to the bookstore and bought it! My mum to my 'plan'! I was over the moon, well, universe! There were about 10 copies in that bookstore, placed at the top of the shelf, it was so high up that I had to use the stool to reach them. I chose the perfect copy, after checking through each book strictly (no broken spine, no dog-eared cover, no folded pages, etc.) I hope that the CCTV was not focused on me!

As soon as I got home, I unwrapped it and checked the pages AGAIN, but that was to look at the font and details of the book! I was very happy with everything and started right away! It was such a fun read.

Poppy, the main character is such a lovable girl! I can't help but imagine her as a very cheerful lady. At the beginning of this book, Poppy lost her engagement ring (her fiancé's family heirloom) and she searched high and low for it. But, nada! She's engaged to Magnus Tavish, an ideal man! His family was intimidating and didn't like the idea of Magnus marrying Poppy.

When Poppy was worried and busy searching for the ring, her phone was stolen! I know how it feels (I've lost two phones)! It's really bad when you have to say goodbye to all your contacts and people can't reach you! Ugh. Thank god, luck was on Poppy's side as she found a phone in a trash can (I think it's okay to keep it)! Sam Roxton called the phone and demanded Poppy to return the phone to him. Sam, I really loved him. He's what you call a businessman; straightforward, simple and serious. I was not impressed and really find him rude but as I read on, I began to fall for this character! Read this book and you will know why! I was a little carried away as I imagined myself going through things in this book (Shhhhh!).

This book is very modern, very relatable. It involves a lot of texts and emails, something very twenty-first century. Seriously, who could live WITHOUT their cellphone? It's worth every cent. No regrets.

This was my first book by Sophie Kinsella and I'm looking forward to getting her other books! She's indeed a Chick Lit Queen! Go, Sophie!! Now, I won't hesitate to pick up phones from trash cans (if I'm lucky)! I didn't want this book to end, I want more of Poppy. Just put our hands together and pray that Sophie would write a sequel! Please, Sophie? I HIGHLY RECOMMEND THIS BOOK TO ALL CHICK LIT LOVERS OUT THERE!