Book News : On the Other Side by Carrie Hope Fletcher 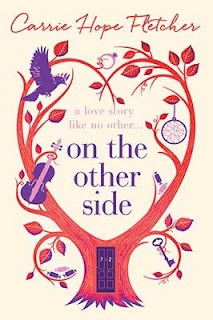 Evie Snow is eighty-two when she quietly passes away in her sleep, surrounded by her children and grandchildren. It's the way most people wish to leave the world but when Evie reaches the door of her own private heaven, she finds that she's become her twenty-seven-year-old self and the door won't open.

Evie's soul must be light enough to pass through so she needs to get rid of whatever is making her soul heavy. For Evie, this means unburdening herself of the three secrets that have weighed her down for over fifty years, so she must find a way to reveal them before it's too late. As Evie begins the journey of a lifetime, she learns more about life and love than she ever thought possible, and somehow , some way, she may also find her way back to her long lost love . . .


On the Other Side is Carrie Hope Fletcher's debut novel. Carrie is also the author of All I Know Now, The Number 1 Sunday Times Bestseller. The blurb sounds absolutely promising and I am actually looking forward to this as this is her first novel. Out 14th July 2016. Pre-order here.
Labels: 2016 Book News Carrie Hope Fletcher