Hi there, lovely chicklitters! I am back with a very exciting news! On 17th March 2015 at 12.30pm, Marian Keyes will be talking about her novel Rachel’s Holiday on World Book Club. YAYYYY!


WHAT YOU NEED TO KNOW

What question would you ask Marian Keyes, if you had the chance? It could be about the book or about writing in general.

The recording will take place in Old Broadcasting House, Portland Place, London, W1A 1AA. If you would like to attend, please email worldbookclub@bbc.co.uk.

The World Book Club is international – we’re looking for questions from people all around the world! Please include your name and the country where you live when you send in your question. 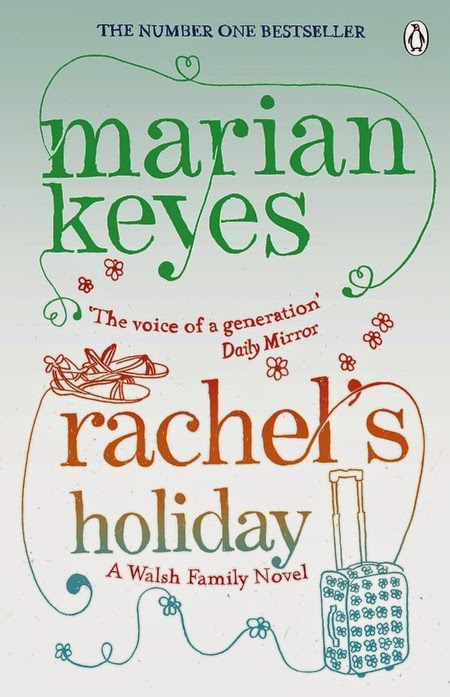 ‘How did it end up like this? Twenty-seven, unemployed, mistaken for a drug addict, in a treatment centre in the back arse of nowhere with an empty Valium bottle in my knickers . . .’

Meet Rachel Walsh. She has a pair of size 8 feet and such a fondness for recreational drugs that her family has forked out the cash for a spell in Cloisters – Dublin’s answer to the Betty Ford Clinic. She’s only agreed to her incarceration because she’s heard that rehab is wall-to-wall jacuzzis, gymnasiums and rock stars going tepid turkey – and it’s about time she had a holiday.

But what Rachel doesn’t count on are the toe-curling embarrassments heaped on her by family and group therapy, the dearth of sex, drugs and rock’n’roll – and missing Luke, her ex. What kind of a new start in life is this?

Marian Keyes is one of the most successful Irish novelists of all time. Though she was brought up in a home where a lot of oral story-telling went on, it never occurred to her that she could write. Instead she studied law and accountancy and finally started writing short stories in 1993 “out of the blue.” Though she had no intention of ever writing a novel (“It would take too long”) she sent her short stories to a publisher, with a letter saying she’d started work on a novel. The publishers replied, asking to see the novel, and once her panic had subsided, she began to write what subsequently became her first book Watermelon.

It was published in Ireland in 1995, where it was an immediate, runaway success. Its chatty conversational style and whimsical Irish humour appealed to all age groups, and this appeal spread to Britain when Watermelon was picked as a Fresh Talent book. Other countries followed (most notably the US in 1997) and Marian is now published in thirty-three languages.

To date, the woman who said she’d never write a novel has published thirteen of them: Watermelon, Lucy Sullivan is Getting Married, Rachel's Holiday, Last Chance Saloon, Sushi for Beginners, Angels, The Other Side of the Story, Anybody Out There, This Charming Man,  The Brightest Star in the Sky  , The Mystery of Mercy Close, and The Woman Who Stole My Life, all bestsellers around the world, a total of thirty milllion of her books having been sold to date. Anybody Out There won the British Book Awards award for popular fiction and the inaugaral Melissa Nathan prize for Comedy Romance. This Charming Man won the Irish Book award for popular fiction.

The books deal variously with modern ailments, including addiction, depression, domestic violence, the glass ceiling and serious illness, but always written with compassion, humour and hope.

In 2009, Marian experienced the start of a major depressive episode, and had to stop any work. Eventually she found that baking cakes helped her survive; and in 2012, she published Saved by Cake, which combines recipes with autobiography.

In 2014, with the publication of the Woman Who Stole My Life, she is trying to restart public appearances.  She appears on TV programmes such as Stricty Come Dancing - It Takes Two, The Great British Bake Off Extra Slice and the Apprentice - You've Been Fired.

As well as novels she has written short stories, and articles for various magazines and other publications.  She has published two collections of her journalism, titled Under the Duvet and Further Under the Duvet, and donated all royalties from Irish sales to the Simon Community, a charity which works with the homeless.

She was born in Limerick in 1963, and brought up in Cavan, Cork, Galway and Dublin; she spent her twenties in London, but is now living in Dún Laoghaire with her husband Tony. She includes among her hobbies, reading, movies, shoes, handbags and feminism.
Labels: 2015 Marian Keyes Special