Today on Eve’s Chick Lit Reviews, I am glad to be interviewing Lucy Dillon about her latest novel, A Hundred Pieces of Me which is out today! Thank you for answering my questions and Happy Publication Day, Lucy! 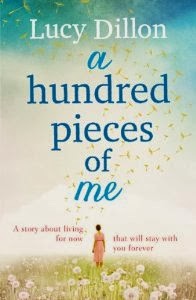 Letters from the only man she's ever loved.

A keepsake of the father she never knew.

Or just a beautiful glass vase that catches the light, even on a grey day.

If you had the chance to make a fresh start, what would you keep from your old life? What would you give away?

Gina Bellamy is starting again, after a difficult few years she'd rather forget. But the belongings she's treasured for so long just don't seem to fit who she is now.

So Gina makes a resolution. She'll keep just a hundred special items - the rest can go.

But that means coming to terms with her past and learning to embrace the future, whatever it might bring...

1. How would you describe your new book, A Hundred Pieces of Me?

It’s the story of Gina, and her challenge to give away all her possessions apart from the hundred that are the most precious, important or irreplaceable – the hundred pieces of her. The novel’s told in a series of flashbacks to explain why the items she keeps are so tightly interwoven with her personal memories, and why dumping some of those things is the only way she’ll get rid of the demons she’s been carrying around for so many years. And how for every thing she gives away, something even better seems to come into her life…

Sorting out my own house! I had to pack everything up before builders came in last year to do a big renovation on my falling-down farmhouse, but when it came to decluttering, I couldn’t junk a single thing– it all felt too precious and personal. So everything went into storage for six months, and when I came to unpack, and saw each item on its own, it was weird how I suddenly felt much more proactive about binning/recycling/giving things away, rather than let it back into my lovely new space. It also felt a bit like unpacking my own history, because every important item brought memories flooding back – like the outfit I wore for my graduation, photograph albums, first editions of my books, and so on.

3. Which part of A Hundred Pieces of Me was the most fun to write?

The parts with Lorcan and the builders who work on the old house in the story. I picked up a lot of brilliant insider details about the renovations on the Magistrate’s House from the restoration builders here. They were very patient and got used to me popping up during their coffee breaks, asking stupid questions like, ‘How much would it cost to rewire a stately home?’ and ‘What would be the worst thing you could find in an old roof? They told me some great gossip about houses they’d worked on, but nothing I could use in the book without being sued!

4. If your main characters were to be adapted for screen, who do you imagine playing the roles of them?

Gina would be someone like Romola Garai or Keeley Hawes, and Nick is like Ben Willbond in my head. Jamie Campbell Bower would be perfect for the young Kit!

5. If you were to choose a memorable line from A Hundred Pieces of Me, which line would it be?

Probably a very simple one from the end –
Now.
Now.
And now.

It makes sense when you read the whole thing!

I’d be working in publishing as an editor, or maybe an agent. (My agent would disagree with this.)

7. What is the best thing about being an author?

Being able to create worlds that you don’t have to leave – you always know what happens after the book finishes, because the characters stay with you in your imagination. Given that all my books are set in Longhampton, and there’ve been five of them now, I feel like I know half the town!

8. Three things you can't live without?

Coffee, Led Zeppelin, time off in the Lake District

9. Do you have any rituals when it comes to writing?

I spend a while before I start writing, making lots of character notes in plain A4 sketch books from WH Smiths, with flow charts so I know what goes where, and images ripped out of magazines to inspire places, houses, people. Every notebook has a page in the back for names: I can’t start until I know what everyone’s called, so I’ve got a shelf full of baby names books for inspiration.

10. This may be a bit of a silly question but how do you feel when a reader (e.g. me) tells you that she loves your writing?

I’m very flattered and delighted! It’s a privilege, really, to be allowed into someone’s imagination, and to put characters and places you’ve dreamed up in there. Getting nice feedback from readers always always makes a writer’s day, so let them know if you’ve loved a book!

11. A piece of advice for my lovely readers who are thinking of becoming writers?

Read lots, and write lots. Writing’s a skill that you only really learn as you’re doing it. Trust the voice in your head rather than ‘overthinking’ what should happen, and if in doubt, read what you’ve written aloud to see if makes sense or sounds realistic. And make a storyline plan – I only get writer’s block when I don’t know what happens next.

12. And finally Lucy, what are you working on now? Tell us more about it?

I’m working on the next Longhampton novel, which is set in the B&B on the outskirts of the town. Rebecca Thwaite and her husband Hugo have moved back to the area to take over the Swan Hotel from Rebecca’s mother-in-law; they haven’t been there long when an accident happens just outside their front door, leaving a woman unconscious and without any ID that could help trace her next of kin. Rebecca agrees to look after the young stranger until her memory returns, but the longer the woman is there, the more questions start to arise about who she is, and what she might know about the Thwaite family… (There is also a dog. Naturally.)


Lucy Dillon was born in Cumbria in 1974. She won the Romantic Novelists’ Association ‘Novel of the Year Award 2010’ for Lost Dogs and Lonely Hearts. Lucy is the bestselling author of three other novels; The Ballroom Class; Walking Back to Happiness and The Secret The Secret of Happy Ever After. Lucy now divides her time between London and the Wye Valley where she enjoys walking in the Malvern Hills with her basset hounds.