Today on Eve’s Chick Lit Reviews, I am glad to be interviewing bestselling author, Alexandra Potter about her new book, The Love Detective which is out today! Thank you for answering my questions and Happy Publication Day, Alex! 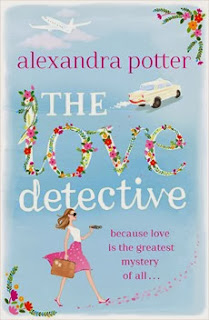 'People always ask me what kind of books I write and I guess you'd call them love stories, but I also think of them as mysteries. After all, what makes two people fall in love? I've written five novels and I'm still looking for the answers. In a way, I'm a bit of a love detective. Because what's a greater mystery than love?'

Ruby Miller has lost her faith in love. In an effort to forget her cheating ex and clear her writer's block, she joins her sister for a week's holiday in India... and embarks on an extraordinary adventure.

Swept up on a magical mystery tour, amid silks and spices, palaces and weddings, Ruby investigates a hundred different stories of love lost and found.

But will a romance of her own remain always out of reach? Or can she find her happy ever after?

1. How would you describe your new book, The Love Detective?

The Love Detective is the first book in a brand new series. I'm very excited about it, as although it's another romantic comedy with 'a sprinkling of magic' I've added the element of travel to the mix. I've set the book in both London and a region of India called Rajasthan which is just so amazing.

The heroine of this new series is called Ruby Miller. She's a romance novelist (no, I promise this book is not autobiographical!) who's fascinated by everything to do with love, from modern-day relationships to all the wonderful age-old legends and superstitions. The book's title came about as Ruby thinks of herself as 'a bit of a love detective. Not in Sherlock-Holmes-in-a-deerstalker type of way. I'm not searching for clues to solve crimes. But because detectives are always exploring mysteries, and what is love, if not the greatest mystery of all?'

However, when we first meet Ruby she's lost her faith in love. She doesn't believe in it anymore as she's had her heart broken by her (now) ex-fiancé. So when her sister invites her out to Goa for a week's holiday, she jumps on a plane expecting a week of sea, sun and sand... and is swept up into an extraordinary adventure across India that involves a runaway sister, stolen bags and a handsome American stranger. Amidst fortresses and fortune tellers and a whirlwind of weddings, her search for her sister uncovers fascinating stories of lost and found. But as the mysteries deepen, secrets are revealed that turn Ruby's life  upside down. And what started as a journey to find her sister, becomes a journey to find herself - and love - again...

I spent a month in India at the beginning of 2012 and travelled around Rajasthan, otherwise known as 'The Land of the Kings.' It was a fascinating place and I found myself in the middle of the wedding season. At the time I was single and I thought how ironic it was, that I was there with my girlfriend, in the middle of all these weddings! I had an amazing time though and met some wonderful people. India is truly magical and it had a profound effect on me and I was inspired to set my new book there.
3. You have written quite a number of books. Do you have a favourite character and why?

Gosh, that's a very hard question as I love all of my characters! I think if I had to choose a favourite female character, it would probably have to be my new heroine, Ruby Miller. She writes about love and happy endings all day long, but in real-life she's single and lives with her little dog in a flat in London. Her fiancé has cheated on her and she is feeling totally disillusioned in love. I think a lot of girls out there will identify with Ruby. After all, we've all been heartbroken and single and wondered if we are ever going to meet 'that person'. She's also very warm, and very, very funny. I had some great comedy moments with her, especially when she's in the desert on a camel.

Favourite male character would have to be Jimi Malik in 'Do You Come Here Often?'. He was such a complicated character - on the outside he was confident and successful, but on the inside he was deeply vulnerable. I had so, so much fun writing his scenes, I was so sad when I typed 'The End'. I still think about him now...


4. Which book was the most fun to write?

Gosh another hard question! Probably my very first book, 'What's New, Pussycat?' as I had never written a book before and was bursting with twenty-nine years' worth of characters and storylines and plots. Also, I was completely naive, I had no idea how to write a novel, I just sat down and started writing and it just flowed out of me. The story of Delilah, who moves from Bradford to Notting Hill was partly autobiographical, and it was a blast to write. I filled the book with so many of my observations and experiences of first moving to London and some of the wild times I had back then! One other reason it was so much fun was it wasn't my full-time job. It was something I did in the evenings at weekends, there was no pressure of 'I must make this deadline or I can't pay my bills!' which can be really quite terrifying for a writer when you are suffering from writer's block!

I've wanted to be a writer since childhood, and was writing stories back then, so it's difficult to imagine doing anything else. However, I was also very into art and drawing and painting. I used to enter and win a lot of art competitions when I was younger and I very nearly went to art college, rather than university to study English Literature. Even today I really enjoy drawing, though sadly I'm always so busy the nearest I get is doodling on a jotter whilst on hold on the phone!


6. Which book do you wish you had written?


7. What have been the best books you have read this year?

I have quite an eclectic taste in books though I don't tend to read a lot of fiction when I'm writing, and I've been working on The Love Detective all year. My favourites so far have been :

Rod Stewart's autobiography - I love autobiographies and this one had some brilliant anecdotes.

JoJo Moyes, Me Before You - I discovered this on a book shelf in a hotel this summer when I was having a break from writing It's a great read, be warned though, you'll need a box of tissues handy.

Time Out Turkey - I went on a research trip to Turkey this summer and this book was invaluable!

Travelling is one my biggest passions and I've been to lots of places (and still want to go to lots more!). India is one of the most amazing countries I have ever visited. Truly magical. Amazing food, stunning scenery, wonderful people.... and the pashminas (I swoon) But for a great beach holiday I have to say Ibiza always wins hands down. People mistakenly think it's this crazy, party island but that's only a very small part of it, the rest is gorgeously unspoiled with some of the most beautiful beaches, clearest water and wonderful food!

9. What is your advice to aspiring writers?

Write, write, write. Writing is a muscle that needs to be exercised daily. Don't wait for inspiration to strike as it often doesn't! Instead you have to make yourself sit down at your laptop, or your notebook, and write. That's the only way you will ever write a novel of 100,00 words.


10. Lastly, what are you working on now? Tell us more about it?

I'm working on the second book in The Love Detective series. It will feature the same heroine, Ruby Miller, but this time I'm taking her to Paris, the romance capital of the world... I can hardly WAIT to start doing the research. Paris, here I come!
Labels: 2014 Alexandra Potter Author Interview