It's time to Rock And Roll in earnest! Yes, Nicky Wells is here to celebrate the upcoming launch of Sophie's Encore. Three cheers for the third book in her Rock Star Romance Trilogy!!!


Says Nicky,
"I'm so excited to share with you, finally, this third installment in Sophie and Dan's epic romance! Thank you for coming to celebrate with me. Read on for :

THE BLURB
THE REVIEW
THE FANTABULOUS GIVEAWAY

But most of all, enjoy yourself and party hard! Are you ready?" 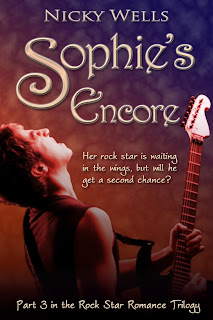 Her rock star is waiting in the wings, but will he get a second chance?


It's all change for Sophie's Jones - only this time, there is more at stake than just her happiness.

Rock star extraordinaire, Dan Hunter, has been her patient and caring friend through the highs and lows since her wedding day, but now he figures it is time for her to start over. By stealth, the rock singer draws Sophie into the behind-the-scenes work for his band's latest album. Through the days and weeks spent together at the mixing desk, Sophie discovers whole new horizons for her life, yet before she can even begin to explore them, she faces the very real threat of losing her rock star for good.

Join Sophie and Dan in Sophie's Encore to find out how their journey will end...


Sophie's Encore will be available in Kindle and Nook formats as well as paperback editions from Amazon and Barnes & Noble from 5 September 2013!

I've been a huge fan of Nicky ever since I read her first book, Sophie's Turn! I enjoyed the first two books of the trilogy immensely and now, to bid goodbye to my fave characters is tough for me because I absolutely loved Sophie's Encore. I really would love to thank Nicky for sending me a copy of this book! She's inspiring and I do look up to her, an amazing lady, I tell you! To be honest, I read this book only a few days before I write this post so the story is still fresh in my mind. I didn't want to forget and as I write this, the events are all playing in my mind.

Dan has been with Soph through everything and supported her like she's the centre of his universe. The beginning of this book was a total surprise for me. Totally didn't see it coming. It's like a 180 degrees change for Sophie, from a happy wife to a grieving widower. That's a lot to take in for me. I was really curious to find out what happened to Steve (Sophie's husband). Since Steve's death, Sophie has became really independent and matured. As a mother with two kids, Sophie gives all her attention to them and she has forgotten about herself. It's really touching to read on Sophie and her kids. I'm sure many readers are touched by those events. This book really is an emotional ride for me as I have so many emotions crossing my mind.

To help Sophie move on with her life, Dan has taught her how to mix music and not just singing this time! At that point, I can feel that they are closer to each other than ever. Music bonded them. When light enters her life again, Sophie gradually realize she's fallen in love with her rock star. Though the love for her kids has taken a lot of space in her heart, the love Sophie has for Dan never changed and she has to learn to love again.

As I have mentioned, Sophie and Dan are my fave characters of this trilogy and I did say that Sophie's like my sister. I loved them so much that I wish they are not fictional. In Sophie's Encore, Sophie's kids are simply adorable! Not forgetting Rachel, the most amazing BFF a girl could have! This girl is so amazing that I can see her as a heroine! She definitely deserves her own story! After all, every girl has a story to tell!

It's totally not easy to wave goodbye to the characters in the book after seeing how they developed. Loved every word of this book and every second reading the book was not wasted. If you have not read the first two books of the trilogy, go get them! This is a trilogy you don't want to miss!

'Join Sophie and Dan in Sophie's Encore to find out how their journey will end...' I mean, HOW THEIR JOURNEY WILL END? You just have read to find out! A 5 out of 5 from me!

Join in the release day fun and mark 5 September in your calendar now! Nicky will be partying
On her blog
On Facebook
On Twitter - #SophiesEncore 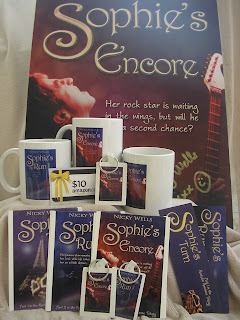 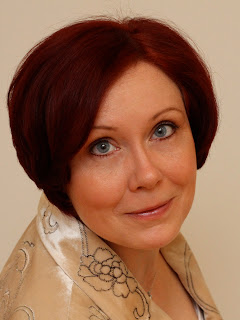 Like Sophie, her leading lady, Nicky loves listening to rock music, dancing, and eating lobsters. When she's not writing, she's a wife, mother, occasional knitter, and regular contributor to The Midweek Drive show on Lincoln's Siren 107.3 FM. Rock on!

Part 1 - Sophie's Turn : So the rock star wants to marry her, but she's officially engaged...

Part 2 - Sophie's Run : Her famous rock star remains her rock while her life takes her on a little detour... 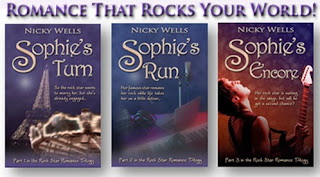