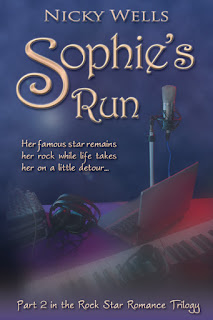 Source : Sent by Nicky (Thank you!)

Her famous star remains her rock while life takes her on a little detour...

Who says that the road toward true love is straight and even? Sophie is certainly discovering that it is anything but.

So she's finally found the man of her dreams. Well...she knows who he is, even though she hasn't actually quite met him yet. When she misses her opportunity, her life goes crazy. Rock star and ex-fiancé, Dan, keeps getting in the way of her new romance — even if he is just trying to be helpful. A fire, an impromptu mini-trip with Dan, and a dreaded wedding later, Sophie is still struggling to meet the love of her life. Just as she's getting it together with her perfect man, best friend Rachel commits an act of unspeakable betrayal. And to top it all, her new boyfriend leaves her lying in the mud.

Sophie has had enough. Confused and distraught, she decides that it is time for radical change. Surprising herself and shocking her friends, she embarks on a secret journey that eventually gets her life back on track.

Recently, as all of you can see, I've posted quite a number of posts about Sophie's Turn and Sophie's Run. Yes, I'm really excited about Nicky's second book, Sophie's Run, a delightful sequel to Sophie's Turn. Sophie's Turn ended with such a surprise ending. When it ended, I wanted to read the second one really badly and now that I have, I'm sharing my experience with all of you. I loved Sophie's Turn but I loved Sophie's Run even more, every word of it. When I was reading the book, I was totally sucked into Sophie's world, a dream I hoped to last. But all good things must come to an end, right? Nicky reminded me that it's a fairytale in three parts and this is just the second part.

Sophie, the heroine of the story is like a sister to me now. It's as though I've known her for a long, long time and I can absolutely feel for her. She's one of the best characters I've came across. She's simple, very human, does stupid things like us and has strong feelings for rock star, Dan. I'm pretty sure all of us can relate to that! I was there with her when she was proposed by two different men, when she left them and now, when she's found her thunderbolt-and-lightning man, Steve. Her journey to find The One was such an amazing journey, filled with drama and love. I was so terribly touched that I cried at some tiny things in the book. Those tiny little things and details matter. Read and you will know why!

This book is divided into a few parts and every part gave me a different feeling, totally felt the emotions through Nicky's words. It's like sitting on a rollercoaster, not knowing what's next. Each character has their own story to tell, it's just so fab! In this book, Sophie's in Germany for some reasons. Greetje, a lovely lady she met there was such a great character. I liked her immediately. Greetje's with Sophie when she's having a hard time, a great listener, just like a mother! Reading about Sophie's experiences there was like Nicky telling her story as she's from Germany. I couldn't get enough of the beauty of the island. It's so beautifully described, carless and a small, warm community. A very romantic island filled with lovely people and places. I would love to be there one day, enjoy some tea while the sun sets! Another must-visit!

Dan (think John Mayer!), the rock star, the ex-fiancé is back again for Sophie's Run. I loved him, no matter how bad he could be. In this book, his beloved Sophie's going after her thunderbolt-and-lightning man and there's nothing he can do about it except letting her go. 'If you love someone, set them free.' It's such a painful thing but it has to be done. I didn't really expect for them to end up as a happy couple in this book, but my heart sank a little when he let her go. Dan's such a hero in this book and I sincerely hope that Sophie will be his wife in the next one.Please make this happen, Nicky! Rachel, the BFF, I adored her in the first book but in this, my feelings faded a little. As the blurb suggests, there would be some conflicts between Sophie and Rach but I didn't expect it to be bad. Fights do strengthen friendships, anyway. Do read to find out! Won't give too much away!

All in all, I can say that Nicky has done a fantabulous job! A modern Cinderella story, well written and fantastic characters to love! I loved EVERYTHING about this entertaining book. From the cover to the tiniest supporting character! I do not want the story to end, it's just heartbreaking to bid goodbye to my fictional sister, the amazing rock chick! Can't wait for her to be back in the third book, Sophie's Encore. Let's hope she will be Mrs Hunter in September! Not too long from now, seven months! Love you, sister! Till we meet again. As for now, let's enjoy the virtual launch party on Facebook! The party is on now!

This book is a page turner and I highly recommend it to all!