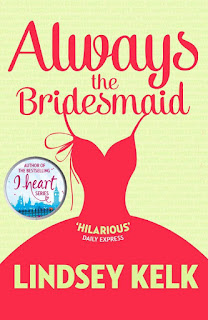 One best friend is in wedding countdown while the other heads for marriage meltdown. And as Maddie juggles her best chance at promotion in years with bridezilla texts and late-night counselling sessions, she starts to wonder – is it time to stop being the bridesmaid?

Always the Bridesmaid is the one book that I have read during my semester break. Thank God for the long three weeks break, I managed to read a few summer titles that I have missed out on! I am no doubt, a massive fan of Lindsey Kelk’s books, not just because she writes awesome stuffs but also because she loves Hello Kitty as much as I do! Exam week was pretty much no sleep and reading a great story during the break was all I needed. I was really lucky to be given an advanced copy that came with cute, hot pink and lime green M&Ms but assignments and life got in the way and ruined the excitement. However, nothing could stop me during the holidays, I literally read my three weeks away. A million thanks to the amazing publicists at Harper for sending me a copy!

I guess I don’t need to talk about the cover because all of Lindsey’s books have great covers. I heart them all. Let’s talk about what’s on the inside then! Always the Bridesmaid follows the story of Maddie, a party planner, who is asked to be a Bridesmaid and given a promotion after a long, long time. All is good. So, what can possibly go wrong when everything is just fine? Almost everything. Her bestie, Lauren is getting married and her ‘crazy bride’ switch is definitely switched on. On the other side, Sarah, is getting divorced and she is asked to be a bridesmaid as well. Bad timing. Maddie jots down every event that follows in her journal and there, the story slowly unfolds.

Maddie is absolutely sane and normal, just the lovely party planner one would want to plan their party. To top it all off, she is ace at planning parties but her boss is the worst person on earth that I think, deserves a place in hell. People often perceive party planners as unreliable and is not serious in life, Maddie gets a lot of that too. I could absolutely relate to that as I am a PR student and uni people and the world just can’t take us seriously. We work for a better life too, you know. And we have ambitions to go after, thank you very much. I found myself being mad and feeling for her throughout the book. She is perfect and that made me love her character so much. Lindsey made her character so genuine that I could the characters seeping through the pages and having fun with us, readers.

Maddie loves her friends a lot and would go to great lengths for them, a real friend anyone would want to have. She gets a little too selfless sometimes that she neglects her own needs. I loved Maddie and her friends so much that I could almost see us hanging out together at the local down the street. I didn’t want to part with them, the story was a life. It’s not fairytale perfect but just good enough to be real and liveable. I wanted to read it again immediately and be in there for good.

The storyline was really interesting and simple to follow, totally undemanding, relaxing read with some fab plot twists. It was unputdownable. Humour and seriousness are perfectly blended and that is something I love greatly about her writing. Strong friendship was portrayed between Maddie, Lauren and Sarah. They fight, they argue but all those just made them stronger. To seal it all, there is of course, a big, love affair. It is brilliant and I do not want to spoil it for all of you out there! Figure it out! I loved the ending, really amazing and it certainly reflects a modern relationship in which we text more than we call and of course, we use more emoticons than ever. *inserts heart-eyes emojis*

Of course as a book blogger, I love reading but that doesn’t mean that I love every book I read. I see it really important to point that out as I do not want readers to think that I am biased. To be honest, I seriously think that it is impossible for me to not love a book by Lindsey Kelk. It is almost as impossible as saying no to coffee and coconut oil. Her standalone novels are as good as both her series.

If you have not read this and do not love her books, you can’t sit with me.
Labels: 2015 Book Review Lindsey Kelk