Book Review : Written in the Stars by Ali Harris 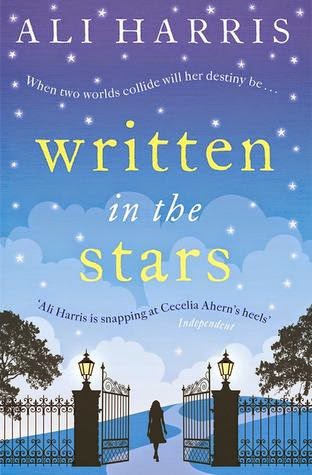 Title : Written in the Stars


One decision + two different paths = how many happy endings?

Have you ever wondered 'What if…?' What if you'd taken that other job, gone on a date with that sweet guy, moved to a different city?

Would an alternative life path have led to a happier ending?

Now imagine if you could have taken both paths…

When Bea Bishop slips while walking down the aisle on her wedding day, she is momentarily knocked unconscious. And in a flash, her world splits and two separate parallel lives take her on two very different journeys. In one, Bea flees back down the aisle and out of the church. In the other, she glides blissfully towards Adam, her intended.

Each path will take her on a very different journey. And each will see her life change for better and for worse. But which story will lead to her happy-ever-after?

Ali Harris has written another bestselling book that will jump into your shopping basket! If you cried buckets over The First Last Kiss, this impressive book will wow you at the end of it and make you think about your life. I adored the cover very much and I was very excited about this book as The First Last Kiss was fantastic. The concept that the heroine, Bea’s life splits in two on the most important day of her life was just completely brilliant. I have to say, Written in the Stars came with a new, fresh concept and I didn’t see it coming. This time, Ali surprised her fans with not just her flawless writing but a great concept, genius!

Written in the Stars follows the story of Bea Bishop that is about to walk down the aisle to marry the man that has been her rock for the last seven years. However, she is not sure if she’s making the right choice when her first love, Kieran appears out of nowhere after eight years. She trips and her unconsciousness leads her to two different paths, two different men and two very different lives. In life A, she marries Adam and in B, she walks away and leaves the Adam. Two different paths, two different men and she can choose one life.
This book left me speechless, I was astounded. I knew this book would be fab but didn’t expect to fall in love with it like I did. The two paths were so well laid that they were not confusing, Ali did it perfectly and beautifully. The two paths entwined at some point and if it’s so nice to have a path to choose as my fave. I actually get to choose, well, sort of!

Bea is a really your perfect imperfect heroine. She’s like a piece of glass, nice but fragile and will break into pieces when she’s under pressure. Sometimes, her past drowns her. Two men left her once and obviously she would have trust issues. I wanted the best for her, and I felt the hurt and feelings she has been through. Sometimes, the past is haunting where you just can’t control your thoughts and struggle to live on. I get that a lot. Her uncertainties cause her to struggle in making decisions, i.e. her wedding.

I loved the supporting characters but the one that left a mark was Milly. She’s really supportive and she’s almost mum to Bea. Milly and Bea’s fiancé, Adam are her rocks. Not just them, her dad’s diary and updating Facebook statuses helped Bea when she’s getting on with her life. I enjoyed reading about Bea’s brother, Cal. He’s really cool and protective though he’s Bea’s younger brother. I have to admit that I liked Kieran and I thought they would end up in a fairytale ending. Kieran is really sweet and he loves with passion. You will feel like you’re young all over again. You might even get fireworks in your tummy, not just butterflies.

As the story goes on, I found that I was #TeamAdam. He’s such a gem. He has a great, loving heart and he loves Bea with his life. A man who wants you to achieve your dreams and be happy with your life, what’s not to love? Though he may seem to be Perfect Prince, he’s flawed too. He has a planned life and it’s dull. Living the way your parents want you to live and doing what they want you to, just sad and depressing. I have been there and to be honest, it sucks. Thank goodness, he decides to do some travelling and discover his own life. Bea and Adam are perfect for each other.

As I read on, I collected bits and parts and grouped them together. Then, I managed to see the whole picture and how perfect the title is for this story. I also found out what caused her to be who she is. Her father left her when she’s seven and Kieran promised her to be back after a year but he never came back. I sympathized with her and she went a bit of travelling to meet her dad in Goa and found what she actually wants out of life. A life where she will be happy and secure.

This book is a not just one love story with two paths or two different men but a story for all who blamed themselves for everything. I loved the message Ali tried to convey through this story. We need to face our own demons so we can move on with life. No matter where life takes us, we will end up with the one we love if it’s meant to be. It’s a fact of life every one of us should understand. Sometimes, we spend too much time thinking about What if..? Rather than wasting time thinking about what would happen if I did (whatsoever), why don’t spend time to enjoy life. We can’t blame anyone or even ourselves because if it’s fated, love will find its way to us as it’s all written in the stars.

“…I know we took a rather unusual route to get here, but I hope you’ll agree that it truly feels like today was written in the stars.” – Written in the Stars, Ali Harris

Ali Harris has put the saying ‘nothing lasts forever’ in a heartbreakingly beautiful crafted love story. A magical story that would tug at your heartstrings and help you to love your own love life better. You might even wonder if you have tried to live the life that’s written for you to the fullest. This is a must-read for fans of Ali Harris.
Labels: 2014 Ali Harris Book Review