Book Review : The Best Thing That Never Happened To Me by Laura Tait & Jimmy Rice 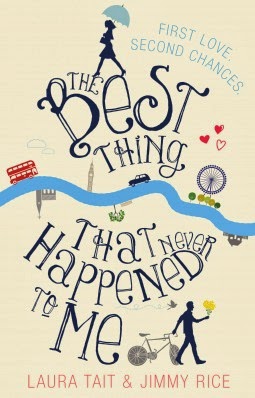 Title : The Best Thing That Never Happened To Me

Everyone remembers their first love.

Holly certainly remembers Alex. But she decided ten years ago that love wasn’t about mix tapes and seizing the moment – though she’s not exactly sure it’s about secret dates with your boss, either.

But what if the feelings never really went away?

Alex wants to make every moment of his new job count. It’s a fresh start in a big city, and he’s almost certain that moving to London has nothing to do with Holly. Almost.

How do you know if it was meant to be… or never meant to happen at all?

The Best Thing That Never Happened To Me is definitely a book I would recommend highly to everyone out there. It is written from two POVs, a boy and a girl. I loved the idea of this book, first love, missed opportunities and second chances. I was truly excited for this when I first heard about it on Twitter. I must say, this debut has been an enjoyable read for me that I finished it in a day.

The Best Thing That Never Happened To Me follows the story of Holly and Alex, which are best mates and they are both crazy about each other. However crazy they are about each other, they stayed as BFFs for over a decade. Holly isn’t sure if her relationship with her boss is going anywhere and Alex is moving to London for a fresh start. After eleven years, who would have thought their feelings for each other could last that long?

It made me think for a bit if love is really that difficult. Both Alex and Holly have experienced horrible relationships before finally falling into each other’s arms. This story is realistic and laugh out loud funny. At first I thought the story was something similar to One Day but I was so wrong. The Best Thing That Never Happened to Me is a story of its own and it’s not dull. I loved the characters in this book as they made feel as though I was talking to them and a part of the story. The chapters alternate between Alex and Holly and I enjoyed this format. The mix of past and present events and the connection totally enhanced the whole storyline into a well developed one. I think this format is perfect for a friendship that could last for over a decade. I could feel what was going on at that time as though I was given the chance to read someone’s diary.

The characterization of this story couldn’t be more perfect. I could relate to both characters almost immediately. As I have mentioned, everything was so real like I was reading their secretly kept diary. The chemistry between Alex and Holly was totally intense and there are some beautiful bits between them, like witnessing a sunset. Both characters were very well developed and very real to me.

For a day, I was lost and drowned in the fictional world that was set by Jimmy and Laura. This book has everything I look for. It’s funny and has an easy storyline. It was almost like watching a movie as everything in this story was vividly described. Though this book was a fun-filled read to me, there was a strong message attached with it. If you really love a person, don’t hold back and chase after it. If you have lost them once, don’t let them slip away again. Not everyone is lucky enough to have a second chance like Alex and Holly and missed opportunities are often the regrets that people bring to their graves. Seize the opportunity and make it happen.

All in all, The Best Thing That Never Happened To Me is a must-read debut! It will make you laugh and cry. When I read the last word, I wanted to read it again. You will either love it with all your heart or hate it! Definitely a 5/5 from me!
Labels: 2014 Book Review Jimmy Rice Laura Tait