Today on Eve’s Chick Lit Reviews, I am glad to be interviewing Portia MacIntosh about her book, Between a Rockstar and a Hard Place which is the fun and fabulous prequel to How Not to be Starstruck! Thank you for answering my questions and have a great day, Portia! 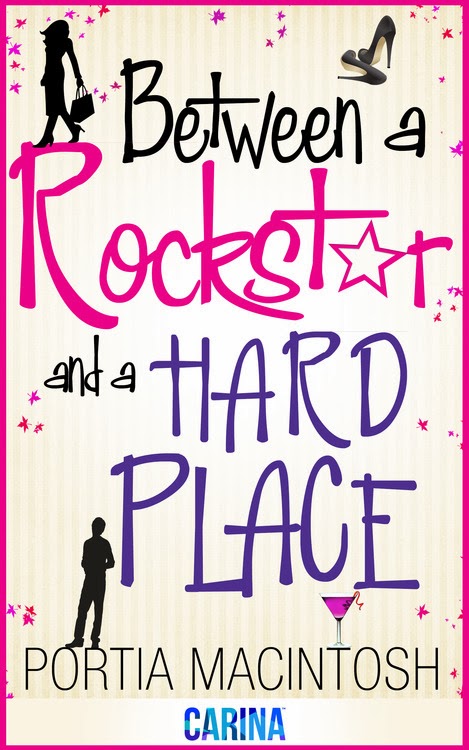 Being best friends with a mega-star has its perks and Nicole Wilde, music journalist, laps them up. But when said friend, Dylan King, gorgeous lead singer of The Burnouts, has zero sense of self-preservation – once a drop of alcohol hits his blood stream ‒ and an inability to keep ‘little Dylan’ in his pants, it also comes with responsibilities. Now, Nicole has to track down Dylan in time to play a charity gig tomorrow. Half a dozen groupies, a haunted hotel, a tattoo parlour, a reality show runner-up and a crazy bed-hopping, sleepless night later – will she find him before the tour bus leaves town? And when she does, is it time to head home? Or to jump on the tour bus and go along for the ride!


1. Could you tell us more about your book, Between a Rockstar and a Hard Place?

Between a Rockstar and a Hard Place is a novelette being released ahead of my first novel, How Not to be Starstruck (out in March). My books tell the tale of music journalist Nicole Wilde, and her adventures working in the music industry and touring with bands. Nicole doesn’t live in the real world. Most of her friends are famous, her relationships are always newsworthy and as a result her life is chaotic. In this kind of scenario it can be difficult to juggle your professional life, private life and love life, so it's a bit of a roller coaster for Nicole.
Between a Rockstar... will ease readers into the lifestyle, as it sees Nicole trying to track down her rockstar best friend in a hotel, when he inevitably gets drunk and goes missing after a gig. It's a classic example of how hard it can be to keep all three plates (professional, private, love) spinning at once.

My books are heavily inspired by my own time working in the music industry. I wanted a way to tell my real life stories anonymously, so using them to make something fictional seemed like the best way to do that.


3. Did you always know you would be a writer?

I didn't, it just sort of happened. The only reason I started writing was as an outlet for these stories, but when people started giving me such encouraging feedback online I decided to take it a little more seriously and send it around to publishers.


4. Where do you see yourself in ten years?

If you'd asked me that a couple of years ago, I would probably say still on the road, living the silly life of a rockstar without actually being one myself. However, now that my books are being published I am fining myself wanting to follow that road instead. I like to think I'll still be writing books... and still touring occasionally - with Jared Leto, because we'll be married by then hopefully [laughs].


5. Which part of Between a Rockstar and a Hard Place was the most fun to write?

I love writing about Dylan King, the rockstar in Between a Rockstar... In real life, I know a lot of Dylan types and they are just so ridiculous. He's a perfect example of a proper rockstar. He's very talented, but he doesn't appreciate it. He thinks because he's famous he can do whatever he likes. He has a kind of confidence that could make you hate him, but you can't help but adore him. I love writing about his bad behaviour.

My taste in books is like my taste in music, film and TV - varied, constantly changing and often embarrassing [laughs]. One of my favourite books of all time is The Bell Jar, by Sylvia Plath, but my favourite genre of all is chick-lit, and that's why I write it. I recently read a book called Snake Typhoon by Billie Jones, which I really enjoyed. It features a butt-kicking leading lady, who you'll find wielding objects a lot more deadly that the can of hairspray Nicole uses as a weapon in Starstruck.


7. A piece of advice for my lovely readers who are thinking of becoming writers?

Be careful who you listen to. Listen to every piece of advice you are given, but don't necessarily follow it. A few agents told me not to write about the music industry because publishers don't like it, but I found a publisher that did.


8. Lastly, what are you working on now? Tell us more about it?

My first full-length novel, How Not to be Starstruck, is out in March. I also have another book coming out with Carina UK later this year, and this one isn't about the music business, it's something completely different for me, so I'm very excited about that.