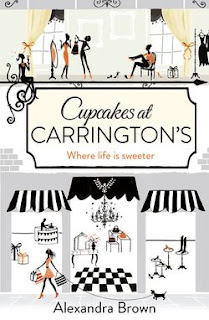 Source : Sent by the publisher! (Thank you!)

Georgie Hart loves her job - running the luxury handbag concession at Carrington's Department stores in the pretty seaside town of Mulberry-On-Sea, and treating herself (once too often!) to a red velvet cupcake with buttercream icing in Carrington's café.

But Georgie is thrown into disarray when Carrington's is plunged into a recession-busting makeover, cueing the arrival of the femme fatale Maxine, who wields the axe in her immaculately-manicured hands.

It spells recipe for disaster for Georgie and soon she's fighting not only for her job, but also for the attentions of her gorgeous boss, James. And when hot newcomer Tom arrives, who may or may not be the best thing since sliced bread, Georgie must decide where loyalties really lie...

When Alex told me about this book, I was totally excited about it! I was happy for her as CAC's her debut novel and I could say that it's definitely a success. A book with a gorgeous, vintage looking cover, lovable heroine that is sweeter than a cup of sweet tea and a whole line of interesting supporting characters. What's not to love? I absolutely loved this book and thank god this is just the first book of the trilogy! It's not going to end soon! YAY!

Georgie loves her job at Carrington's more than anything and is addicted to red velvet cupcakes. I, myself am a huge, crazy red velvet cake lover! Georgie runs the luxury handbag concession at Carrington's and to be honest, I'd love to have that job! Imagine the staff discounts and bags I could have. Gah, from mini Pradas to Louis Vuitton holdalls! Gosh, splurge, splurge and maybe I would end up deeply in debt. Eek, enough about that! Pretty bags and red velvet cupcakes, the perfect duo! Georgie's life was all smooth till she was told that the store will be going through a make-over. Some people will be made redundant. Horrible, isn't it? To be separated from the job you love more than anything and to be away from the loveliest red velvet cupcakes, it's a mind torturing thing. As if that's not enough, there's the nasty Maxine, the person that's in charge of the whole thing. Her presence made everyone's life at Carrington's miserable but where is the fun in a story without a bitch to loathe? In every best-seller, there is always a handsome hero readers will fall for. In this one, I fell hard for Tom, someone that caused my heart to race like a racing horse!  He's such a Prince Charming, gosh. Sadly, he's fictional. Deliciously described, like a red velvet cupcake! I can't stop talking about red velvet cakes. Just read to find out more about Red Velvet Tom!

Other than the lovely Georgie, her friends and colleagues were pretty amazing too! Loved the whole lot of them! They are like the butter cream and sprinkles on a cupcake. The story were beautifully enhanced and developed with them in it. I loved how this story is written from Georgie's point of view. Everything seemed so real when I was reading it. I was totally absorbed into this book, as though I lived in the book, gossiping away, sharing pasts with Eddie and Sam. Eddie's such a cute character, Georgie's GBF and very interesting too! He's like the star you see on a pitch black night, a yellow diamond. Totally unpredictable and with all the witty lines he came up with, I can't help but laugh like a lunatic. There's also Sam, the cupcake queen! She's the supportive best friend that's with Georgie through thick and thin. Such a great friend, endless support and of course, delectable red velvet cupcakes. I imagined Emma Watson as Sam, positive and approachable like her character in The Perks of Being A Wallflower. I would love people like them as my besties!

As much as I hated the fact Cupcakes at Carrington's ended, I am horribly excited for Christmas at Carrington's! I didn't want this delicious read to end but all good things must come to an end, right? All in all, this book is like a red velvet cupcake - beautiful cupcake wrapper (the cover), delicious cake (Georgie), amazing buttercream and sprinkles (supporting characters)! Take a bite of this wonderfully written novel and I can assure you, you will thank me for recommending this! Your perfect companion for a wintry night!